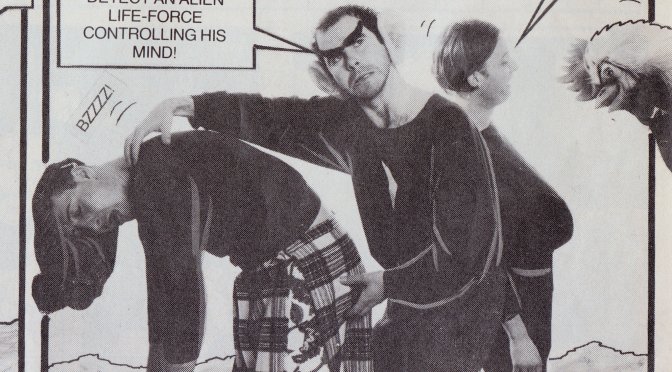 I have a little personal story about this issue I’d like to share. I started collecting OiNK at issue 14, but some time after this I was at my cousin’s house when he gave me a couple of his back issues. One of these was the one I’m reviewing now. I remember coming back downstairs from his bedroom and sitting next to my late nanny, who looked at the cover. I didn’t know how she would react and was delightfully surprised when she started giggling like a little schoolgirl and gave me a little wink.

It’s just one very happy memory I associate with this comic and I’ll share more as we go along. My nanny’s giggle was completely justified with Tony Husband‘s cover and its bare piggy bottoms, which actually wraps around to the back page and its explanation for the image. I always loved a good wraparound cover on a comic. Marvel UK were very good at them and while this one isn’t advertised as such (the poster mentioned on the cover refers to a Star Wars spoof inside) it would make for a funny addition to the wall.

This is the first of the themed editions, which over the course of the majority of the fortnightly issues would include everything from traditional Hallowe’en and Christmas themes to music, health, families, war, revenge, love… the list goes on. It added another original element to OiNK itself and made each individual issue a unique experience. In the early issues editor Uncle Pigg and critic Mary Lighthouse would often introduce the theme, mostly written by Mark Rodgers and drawn by Ian Jackson.

I wonder if Colin Baker ever saw himself drawn in Ian’s style?  This wouldn’t be the last time The Sixth Doctor would influence Uncle Pigg but that’s a story for a future issue so you’ll just have to be patient. Mary’s TARDIS pops up on the Grunts page as she desperately tries to phone the operator and then she reappears in her own strip near the end of the comic. But she wasn’t the only character to materialise throughout.

Next up is undoubtedly the star strip of the issue. Boldly going where no photo story had gone before, the OiNK team were really pushing the boundaries of what they could achieve with the format, the characters literally bursting out of the panels and running amok throughout the issue. My original exposure to Star Truck was with the sequel tale in the first OiNK Book, which was even more chaotic! Here, in only the third issue, is the imagination of the OiNK team on full display.

Our cast is made up of Mark Rodgers as Captain Slog, Patrick Gallagher as Sock, Marc Riley as Jock and Tony Husband under the chicken mask as the alien, Jerm. Can you imagine the fun these guys had creating this? Imagine this being part of your job! Jerm would make his escape and pop up in various other strips, a few examples of which I’ve included below.

First though, prolific IPC Magazines comics writer Graham Exton was also part of the creative team behind OiNK and contributed many stories and countless amounts of puns to the comic. The first full strip of his I’m showing here is the first appearance of regular nutball, Roger Rental, He’s Completely Mental, as drawn by local Northern Ireland artist Ian Knox.

Roger was always a favourite of mine. Most of the time he’d appear in quarter-page strips like this one, each with an innocuous beginning, only for Roger to take the meaning of something completely the wrong way. Roger would appear in most of the fortnightly issues before disappearing when the comic turned weekly. But that’s still a lot of short, sharp gags and he would never disappoint.

There are so many highlights within the pages of this issue it’s been difficult to select just a few for review purposes. They include Billy’s Brain, a story about a young boy who inherits his genius Uncle Vincent’s sentient brain and together they outwit the thieves wishing to use his knowledge for their own nefarious needs. Burp the Smelly Alien‘s page makes a bold impact with its use of one colour (and check out that final panel gag), the Star Truck crew pop up in Horace (Ugly Face) Watkins, Ian Jackson‘s depiction of penguins is a highlight of The Golden Trough Awards and Maggie Pie, Collector of Weird Things goes on a wig collecting spree.

The comic never shied away from spoofing all the things its readers loved. Ghostbusters, He-Man, James Bond and more would all end up getting the Oink! treatment. Turning the page to an OiNK version of your favourite cartoon or toy was always a thrill, a bit like seeing your favourite celebrities on Spitting Image. One franchise they were quick to latch on to was Hasbro’s Transformers.

Central to this particular take was the simple idea these robots could disguise themselves as anything, and I do mean anything. Everyone remembers the toys transforming into cars and airplanes but there were also guns, stereo systems, cassettes and all manner of original ideas. OiNK took this concept and ran with it.

The Transformoids is gloriously illustrated by Ralph Shephard whose style I distinctly remember, mainly because he’d give the same treatment to Thomas the Tank Engine & Friends which I was a fan of at the time. So it’s surprising to discover he only contributed to nine issues in total. But such was the impact of his work it was still a highlight of the entire run.

The Transformers would be the subject of a Madvertisement much later but this is my favourite take on the Robots in Disguise. The ludicrously giant robots appearing out of the flimsiest of objects reminds me of being puzzled, even as a kid, as to how Decepticon leader Megatron could transform from giant robot into a gun held by his comrades in the cartoon. It never made sense to me, but it ended up giving us this delightful, genuinely hilarious spoof so I’ll forgive it.

Time to take a trip to a town that sounds just lovely but in reality is one you may wish to avoid. First though, just above it on the page is a quick pun from Tony Husband in the ongoing Star Truck chase sequence.

Zootown sounds innocent enough and on the surface this looks like a strip you could find in any other comic; a town where the residents go about their daily lives, who just so happen to be animals. But this is OiNK, so of course there’s going to be a twist in the tale. Here, the animals keep their various instincts, insights and, best of all their appetites.

The creatures were never given names as far as I remember, so every issue we were seeing different random inhabitants, but each species would act in specific ways with each other. The carnivores would often get the upper paw, terrifying the little docile animals, but thankfully I don’t think they were ever on the buffet menu. Of course, I could be wrong but there always seemed to be some kind of strange friendship there.

“We knew you’d come this way, so we took a shortcut through the staples!”

This first episode I’m showing may not have that particular aspect of the ongoing series but it’s still the perfect example of the daft humour we’d enjoy every time. Zootown felt like such a richly populated place even though we saw so little of it each issue, such was the talent of its creator David Haldane.

Before we finish off with the final part of our space saga we’re joined by Albert Einswine and his fascinating Science Facts for Simpletons.

Any excuse for some more Ian Jackson artwork, right? Well, it’s not just because of the art obviously. It’s a genuinely funny read and sums up how unpredictable the humour in OiNK could be, in particular in these little one-off additions to every issue. Ludicrous stuff.

Speaking of which, we’ve made it to the last page so it’s time to rein in Jerm once and for all as we conclude the first outing for the crew of the Enterpies with Star Truck: The Final Chapter. What I love the most here is the fact they’re all so self-aware of being inside the pages of a comic. From the reference to it being on page 31, to the shortcut through the staples taken by the Captain and his men, the daftness doesn’t let up for one panel. Check out the cardboard tube/tennis racquet gun, elaborated upon with some quick hand drawn lines.

A brilliant, genuinely very funny strip the likes of which you just wouldn’t have seen anywhere else. As the comic continues the photo stories become more elaborate without ever losing their cheap and cheerful feel, never forgetting they’re taking the hand out of those in other comics and magazines which were trying (often failing) to look serious and professional.

Star Truck would return in The Oink! Book 1988 and that’s how I first came to know them. Somehow, the sequel is even funnier, again taking place across several other pages but in the much bigger book format there’s more scope for what they can do with the idea. It’s a definite highlight of that book so you can look forward to it appearing here during Christmas 2022.

That’s us all done for another fortnight, at least as far as OiNK reviews go anyway. There’s always more going on here on the OiNK Blog so make sure you keep up to date on the latest additions by subscribing or by keeping an eye on the social media feeds. OiNK #4, the World Cup ’86 issue will be here Monday 14th June. You can also see its promo from this issue on the blog too.