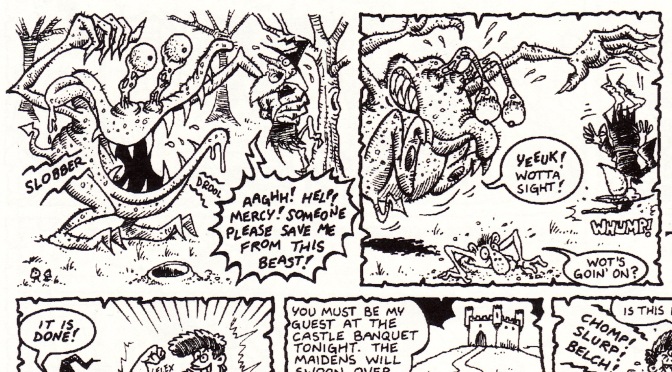 Lew Stringer is synonymous with OiNK thanks to his creations Tom Thug, Pete and his Pimple and Pigswilla alongside a multitude of one-off strips and the scripts for Ham Dare, Pig of the Future. But I remember Lew being everywhere back in the 80s, popping up in my Transformers and The Real Ghostbusters comics as well as a slew of other titles. But before all this he’d created a certain smelly little troll by the name of Derek whose comic collection is available to buy again thanks to a second printing.

Derek the Troll was originally created in 1984 for a competition in the role-playing magazine Warlock. He may not have been the winning entry but the editors liked him so much he became a regular strip in every issue. When it folded Derek made the transition to White Dwarf for a few issues before he was retired in 1987. He made a return for the book You Are the Hero in 2013 and then most recently in digital comic Goof, the last issue of which was never released so hopefully we’ll get to see the conclusion to that story in the future.

So who is Derek? Well, in the world of role-playing games the trolls are a breed of character generally overlooked as grunts in bigger battles, cannon fodder for the enemy. Think vile, smelly, disgusting versions of pawns in chess. To quote Lew, Derek is “a likeable troll with obnoxious habits”, which sounds like a character OiNK fans can get behind. The strips are highly imaginative, given the almost limitless scope of the tabletop games universes he’s meant to be set in.

Sometimes Derek is downtrodden, sometimes he gets the upper hand, so you never know where each tale is headed. There are more fun monster designs, plenty of puns, a rhyming strip, a make-your-own-adventure strip and loads of genuine laughs. Included are all of Derek’s stories from the aforementioned magazines, the 2013 book and even the original story sent in as part of that competition, which sees print here for the first time.

But that’s not all. As noted on the cover the complete run of a character called Rock Solid is also included and right at the back of the comic you’ll even find a little bit of Combat Colin.

Rock Solid is an egotistical, self-centred space hero whose ego is a lot more evident than any actual talent. Lew explains how Rock was difficult to write as he was deliberately created to be unlikeable, yet the readers had to enjoy the strip and want to see more. It’s a delicate balancing job and I think it works, even if by the end you’re hoping he’ll get his comeuppance. Does he? You’ll have to buy the comic to find out.

Rock Solid was created for early 80s independent comic Swift Sure and all five chapters of the story are present here, fifteen pages in total. Just as we’d later see with Combat Colin every week in the pages of Transformers, Lew’s ability to create enjoyable villains has always been strong. The gross Lucas Mucus is the highlight here and you can see him channelling his inner Tom Thug above. He’s a mutated human ruling over the gross alien race, the Grots. On this following page we’re introduced to their very alien language and the need for reader translations.

Rounding off the package are two half-page Combat Colin strips. This was originally released before Colin’s own series began, four issues of which have already been published. Unfortunately, the website host of Lew’s online shop closed down a while back and his comics have been unavailable. But he’s now selling again through his own eBay seller’s page, starting with Derek’s comic.

Derek the Troll has 32 pages in total on very high quality paper with card covers, and two pictures cards of Derek and Colin are also included. There’s an interesting editorial and under each strip you’ll find the original dates of publication and little snippets of information from Lew about each. All of this is only £6.00 including postage. It comes bagged and boarded, posted in a card-backed envelope to keep it safe in the post and every issue will be signed on the inside. So if you haven’t bought any of Lew’s independent comic releases yet make sure you start now with your own copy of Derek the Troll, then keep an eye on the blog for reviews of the other titles as they become available again.

To finish with, here’s a brilliant little sequence from the top of Derek’s final appearance in White Dwarf magazine. The magazine’s editors loved him but apparently opinion amongst readers was divided, so Lew decided to concentrate on his OiNK and Transformers work instead. I think this is a hilarious response!