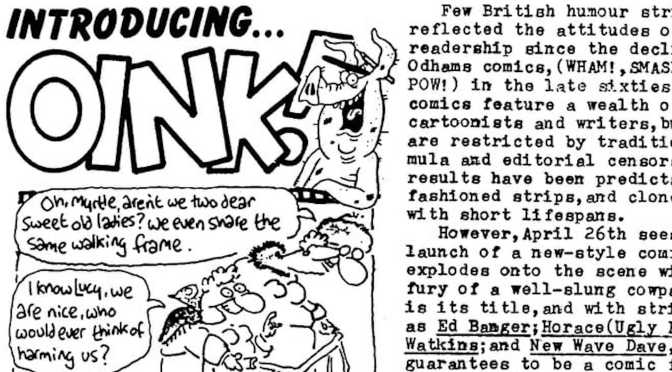 As we approach Monday 26th April 2021, the 35th anniversary of the preview issue of OiNK, let’s take a look at an article from the time written by Tom Thug and Pete and his Pimple creator Lew Stringer for Fantasy Advertiser. An introduction to the new comic just before its release, it would’ve been the first time readers of the fanzine heard about OiNK.

Fantasy Advertiser was the creation of Frank Dobson and had been printed since 1965 as an “Ad Zine”, being handed off to a series of editors over time. It featured listings of British and American comics for sale in the UK long before the internet made this a lot easier, alongside features like the one you’ll see below. Lew was a regular contributor with a column in every issue.

Lew would cover news of new comics, discuss classic titles and interview creators such as Mike Higgs, Kevin O’Neill etc. It sounds very much like his later Blimey! blog which, while it’s been closed and is no longer added to, is still a treasure trove of British comics information.

The OiNK article featured in #96 of Fantasy Advertiser, dated May 1986 and you can read it in full below. I think the first paragraph perfectly sums up why Mark Rodgers, Tony Husband and Patrick Gallagher created OiNK in the first place. There’s also an interesting reference to the specific things other children’s comics required of their cartoonists and the rules they had to follow, which the new team would gleefully abandon. There are some details about the two dummy issues created to sell the concept to IPC Magazines, their positive reaction and how it was Bob Paynter, the Group Editor of Humour who approached Lew to join the team. (When I’ve spoken with Patrick and Tony over the years they’ve often referred to Bob as “OiNK’s champion at IPC”.)

“The humour is the kind we like. Violent, anarchic, weird, generally lunatic and very modern.”

There’s a great description of Lew’s Tom Thug and how he was a new, different kind of comics character and an interesting look at the independent nature of the comic and how it was put together in a way unlike any other children’s title of the time. You’ll also see a few select panels from the early issues, including Tom Paterson‘s excellent Wet Blanket who is returning to print in a special collected book later this year.

Thanks to Lew for the kind permission to share this with you all, so just click on it below and have a read for yourselves.

Also note the correct influences for OiNK here and the absence of any mention of Viz. OiNK was never a children’s version of that (admittedly very funny) comic and was never intended to be, despite what is usually erroneously mentioned elsewhere online or in magazines.

David Hathaway-Price has, with permission, archived many of those Fantasy Advertiser issues digitally, at his Classic UK Comics Zines website, including the issue featured here. The fanzine continued until #115 in 1991, eventually relaunching as an online resource in 2010 by one of its previous editors, Martin Skidmore.

Don’t forgot to come back on Monday 26th April for the review of that preview issue of the world’s funniest comic and the whole reason this website exists. An amazing two-and-a-half years is about to begin. Not to be missed, pig pals.

35 years ago today the high-flying special of #OiNKcomic was released, containing the Ham of Steel himself, Superham! Written by Mark Rodgers and drawn by Ron Tiner, this is a superb spoof and worth the price of entry (a princely 35p) alone.
Is your social media timeline full of Eurovision? I'm here to save your Sunday, you can instead read all about the full series of #MarvelUK's #Visionaries across 11 posts on the #OiNKcomic #blog. Grab a big mug of coffee, lie down and come with me to #Prymos and the land of the #KnightsOfTheMagicalLight. Link in my bio (oink.blog). 🧙‍♂️🐽
So 35 years ago today news of a new piece of #OiNKcomic merchandise broke in the pages of #Zzap64. The #OiNK game was on its way for #Commodore64, #SinclairSpectrum and #AmstradCPC computers and #Zzap had a special preview which featured a cameo from Snatcher Sam (Marc Riley), a history of the #comic and some details of what to expect from the game itself.
Coming up Monday on the blog...