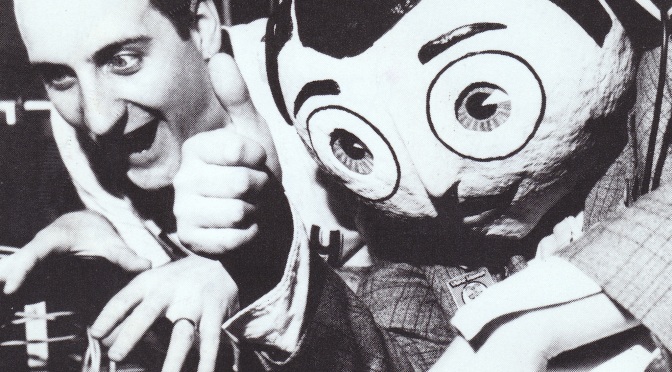 Back in 1987 a unique piece of merchandise for a comic was announced in the pages of OiNK. In issue #37 we were treated to this full page advertisement featuring Marc Riley as petty thief Snatcher Sam and Chris Sievey in his role as celebrity superstar Frank Sidebottom. They’d come together to record The OiNK 45, a single-sized vinyl record available only through mail order in the comic.

Back in the premiere issue OiNK had launched itself on to the unsuspecting public with a free flexidisc, a floppy piece of pink see-through plastic containing two songs, namely the imaginatively titled The OiNK Song and The OiNK Rap. Marc produced and performed both and they proved a hit with the kids and an annoyance to the parents of said kids, which I’m pretty sure was the idea. Now they’d been rerecorded at Drone Studios by Marc and Frank with engineer Paul Roberts alongside a brand new song.

When I saw the advert for the first time I immediately begged my parents to write a cheque for the record. I remember the agonisingly long wait for it to arrive and then my mum and dad wished it hadn’t. I played it almost non-stop for a few days, being told several times to turn it down. Let’s just say it wasn’t to everyone’s taste. As I said, annoying readers’ parents may have been the idea behind the songs in the first place.

I’d missed out on the original flexidisc first time around so had no idea two of these were new versions of previous songs. I remember loving The OiNK Psycho Rap (as it was now called) as a kid on The OiNK 45, written by Tony Husband and Marc, and when I finally got my hands on #1 decades later for the blog with a mint condition flexidisc I’ll admit I was confused as to why I’d liked it so much! The answer is that the version here is completely different and a whole lotta fun. The words are almost the same but it’s more professionally put together. While I’m still not going to blast it at get togethers with friends, it may find its way on to my HomePod.

Fortunately for my parents, but heartbreakingly for me, just a few weeks after it arrived back in 1987 I ended up playing it for the very last time. I’d taken the record out of the hifi in my room and placed it on my bed without its sleeve while I listened to something else. It ended up being a nice, warm and sunny October day so off I went outside to play with friends for the afternoon. When I came back I found out to my horror what happens when a vinyl record sits under a skylight on a day like that.

It was badly warped, looking like a disused napkin someone had tossed aside. I was crushed. My parents refused to buy me another, telling me it was a lesson to learn (in reality it had brought peace to the house once more) and, having not yet made a cassette recording so I could take the songs outside with me, that was the last I heard it. Only now have I been able to hear these versions (and the third song) for the first time since then.

This past summer I was finally able to track down a copy of the record and I’ve waited until now to listen to it as a special festive treat for pig pads. This should be interesting with my now-adult ears! First up, the cover art was compiled by Marc Riley and the photographs on the back and on the adverts were taken by OiNK’s resident photographer John Barry under co-creator/co-editor and co-designer for the project (alongside Marc) Patrick Gallagher’s direction.

There’s a reference to Mike Gallagher brewing the tea, this was Patrick’s brother who played sax at the studio sessions (he was also in Frank’s Oh Blimey Big Band) as well as making the refreshments. Patrick tells me altogether they recorded roughly 50 takes of each track but ended up using the first of each! All that remains now is to place the vinyl carefully into my record player and crank the volume up. We’ll start with the new versions of The OiNK Psycho Rap and The OiNK Song (written by Mark Rodgers and Marc). You’ll be glad to hear the latter is still sung by high-pitched pigs.

Unfortunately there were no lyrics sheets with the record so young me had a hell of a time understanding those piggies but the lyrics were printed in the first issue. Only a few words have been changed here and there for the rap, so feel free to use that photo above to follow along.

Apologies that I have no fancy equipment to record the songs in lossless quality (or whatever it’s called), you’ll have to make do with my video recording it with an ever-tiring outstretched arm.

“What the heck you think you’re doing, you?”

On the B-side is the brand new song, The OiNK Get-Together Song. Chris sings along with Marc in the previous songs and Frank even makes a small guest appearance in The OiNK Song when he realises he’s on the wrong track and asks the listener to turn the record over. This next song is twice as long and sees him in his usual place as the lead singer, with Little Frank constantly asking when he’ll get to contribute. It’s billed as a song starring characters from the comic, however the reality is much different (and funnier) than you might expect.

In my head this song had included various impressions of characters but instead we’re introduced to them playing instruments or making lots of loud background noise. Of course it would be this! Highlights include it descending into chaos on more than one occasion, especially when Billy Bang and the Street-Hogs get involved, Frank and Little Frank’s arguments getting more and more aggressive and there are cameos from some long forgotten characters such as Billy’s Brain and ‘Ed Banger.

My own personal favourite moment is when Frank messes up and just readily admits it right there in the song!

It’s a genuinely funny record and I’d heartily recommend splashing out the few quid it costs on eBay when it pops up, but let’s just say I think I can understand where my parents were coming from when they refused to buy a replacement once they’d escaped it. Brilliant stuff and very typically ‘OiNK’. No other comic could’ve done this. If you do decide to buy it for yourself just be warned, the sax in The OiNK Get Together Song will be stuck in your head from now until the end of time, whether you want it in there or not.

Above you’ll see Mike Gallagher as part of Frank’s band in a photo Patrick sent me, alongside an image of the original test pressing of the vinyl shared by Tony Husband on the OiNK Facebook Group. The final photo features the children of the studio owner and a very tanned/rosy/burnt Marc Riley and Patrick Gallagher, who may have just come back from holiday according to Patrick himself.

The OiNK 45 and the mug were the only pieces of merchandise I had as a kid so it’s great to own them both again today. This has genuinely been a whole lot of fun to revisit. It was another contributing factor to what I refer to as the Golden Age of my very favourite comic of all time.