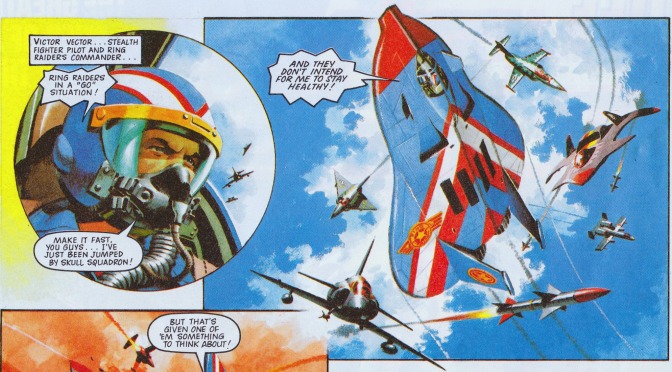 That logo brings back so many happy memories. For a while back in the late 80s and early 90s I was obsessed with the Ring Raiders toys by Matchbox and I even cut out that name from the box of one of the bases and stuck it to the outside of my bedroom door. Some kids had their names on their door, but not me. Like I said, obsessed. You can find out more about the Ring Raiders toys (and merchandise) in my introductory post.

The real time read through of the short-lived but truly brilliant comic series begins today with the issue of Eagle dated 16th September 1989 (on sale 9th September). A banner along the top of the cover alerted readers to the free gift inside, one that would signal the release of the brand new licenced title from Fleetway.

Inside the matt paper of Eagle was a free Ring Raiders mini-comic, printed on higher quality stock that really made it stand out. The bright paper also makes the gorgeous Ian Kennedy artwork really pop too. While Ian would contribute to every single cover for the fortnightly this would be the only time he’d produce a strip and it’s certainly an eye-catching piece. I wasn’t aware of this preview’s existence until a few years ago, but if I’d been reading Eagle at the time and saw this upon opening the comic, I think I may have found it hard to breathe with the excitement.

Okay that’s an exaggeration, but probably not as much as you think.

Four pages isn’t a lot, let’s face it. But this was par for the course by this stage in the UK comics market. OiNK was the first for the 80s to establish using a preview comic for marketing a new release and they did so with a full-size, 32-page publication given away free in a handful of IPC titles (who would later sell all their comics to Fleetway). That was in 1986.

In 1987 another of Barrie’s creations, Super Naturals began with a 16-page preview issue with full-sized pages, then in 1988 his original Wildcat comic’s preview was also 16 pages but at a reduced size. In the same year Marvel UK launched its Visionaries monthly with a small four-page mini-comic, made up of an edited down version of the story to be published in the first two issues. So you can see how things had developed over the decade.

Space was at a premium here to grab the attention of the readers sufficiently enough to get them to buy a new comic, but Ian’s gorgeous hand-painted artwork is certainly bold enough. A basic plot written by Eagle and Ring Raiders’ editor Barrie Tomlinson is just to set up a big mid-air battle between the Raiders and their enemies, the Skull Squadron, in order to show off the kind of action we could expect.

Aboard their time-travelling Flying Fortress the Air Carrier Justice they’re alerted to a mayday from their leader Ring Commander Vector. The pilot receiving the alert via their ring is actually one of my two favourite characters and pilot of the futuristic Grumman X-29. I talked about this being my first purchase in the previous post. What follows is a double page spread of gorgeous aerial action featuring all kinds of various aircraft from across time, which as an aviation enthusiast must’ve been really enjoyable for Ian to draw.

In the toy line, and indeed in the comic proper, the pilots shown here would each command their own wing of four planes and pilots. But for the benefit of this preview and introducing the readers to the concept it’s best to show as much variety in aircraft type and aesthetic design as possible, so the Wing Commanders of many different wings are used instead. It works a treat and certainly comes across as confident in the concept’s ability to produce dynamic comic action.

The back page shows Ian’s cover for issue one, the first I saw as a child and mentions the brilliant free gift (an actual Matchbox Ring Raiders plane) and the fact the pages will be bigger, with half in full colour, much more than the comic this preview was given away with. If only it had become as big a seller as the hype states here! But that’s something we’ll deal with at the end of the real time read through.

As I’ve said before this remains my second favourite childhood comic, with only OiNK beating it to the top spot. It was an exciting read every fortnight and really holds up today as top quality stuff. There’s some real depth to the characters (which is no small feat given the outlandish setup and the toys), hints of a wish to tell big epic stories, loads of action, a sense of humour and exciting artwork.

So for the next few months I’ll be reviewing each issue on the date of its original release, going in-depth into stories, characters and art and giving my honest opinion on reading the comic now as an adult, as well as reminiscing about what it was like at the time, obviously.

212 pages in total, the next 24 of which will be winging (I really do have to stop the plane puns) their way to you on Thursday 16th September 2021. I hope you’ll join me then. The Command Is In Your Hands!