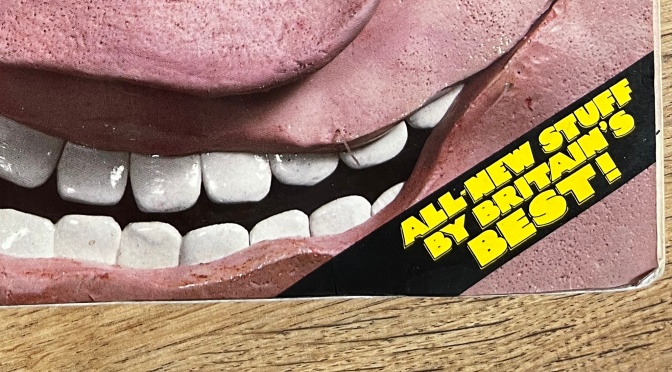 Hot on the heels of the news Rebellion is to reprint some of Tom Paterson‘s OiNK strips later this year in The Tom Paterson Collection, comes the news of a Kevin O’Neill strip from one of the OiNK Books seeing publication again! The strip in question is the brilliant The Truth About Santa, written by Tom Thug and Pete and his Pimple cartoonist, Lew Stringer.

Kevin is probably best known for his 2000AD work, most notably Nemesis the Warlock, as well as Marshall Law and The League of Extraordinary Gentlemen. For OiNK, he contributed to two issues.

First up was a fantastic four-page The Price is Right parody in the 1987 Holiday Special and later that year came the first annual and the highly memorable strip above. Anyone familiar with Kevin’s work and his very unique style might wonder what kind of Christmassy strip this could be. All I’ll say is that you will not be disappointed! Kevin really is one of Britain’s Best.

So anyway, a second edition of Kevin’s Cosmic Comics book has been released by Hibernia Comics in association with Rebellion’s Treasury of British Comics and Gosh. The first version went down a storm but this is more than just a simple rerelease, it contains a lot of extra content too. There are 28 more pages (making 96 in total) and what’s in this new section falls under the banner ‘Kev’s own’, compiled by the man himself.

Lew announced the news on his Lew Stringer Comics blog with the following details:

“[‘Kev’s Own’] is a collection of Kevin O’Neill’s early covers, samples and unpublished work for magazines like Interplanetary News and Legend Horror Classics, as well as Titan books cover designs and the never-before-reprinted 7 Wonders of the Galaxy series from 2000AD and more! Also included in ‘Kev’s Own’ is commentary by Kevin on the art included and his early career.”

Chronicling Kevin’s career and the development of his art over the years this is a must-have for fans, of which there are plenty so if you are one I suggest you get clicking over to the Hibernia shop now and get this ordered, because this is a very limited print run. Priced at £10.49 plus postage it’s also unmissable for any OiNK fans who’d like to support any reprint releases.