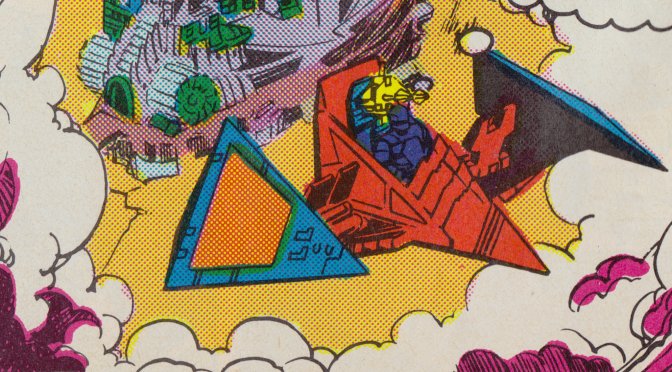 Starting with this third edition of Marvel UK‘s monthly Visionaries are stories I’d never read before collecting these for the blog. The origin story I felt I knew almost verbatim, but now the comic was diverging away from the cartoon and forging its own path. Having missed the regular comic as a kid, I’ve looked forward to finally getting to read these stories.

With these being original creations and something fans of the cartoon may have been eager to read, it’s confounding to see once again the editorial page not mentioning the story at all. Even though it’s called Vision On it’s basically an advertisement for other titles again, this time the new Action Force Monthly and Dragon’s Claws (called by its original name here which was changed just before its release), both of which were of the smaller American format and designed to try to sell UK material back into the US market.

Next to the editorial the first page of Balance of Power is a bold image. On it, Merklynn‘s stone face stares down at the assembled Knights and reiterates the words from the end of last month’s story. Jim Salicrup, who adapted Frank Dille‘s teleplay origin story has created the plot this time around but full scripting duties fall to Gerry Conway (The Punisher, Spider-Man, Transformers and G.I. Joe cartoons, Diagnosis Murder) who would take over as the comic’s writer.

The art team are the same as the previous issues, with pencils by Mark Bagley, inks by Romeo Tanghai, letters by Janice Chiang and colours by Julianna Ferriter. Unfortunately, it’s in this final category that the issue is let down. There are quite a few colouring errors, which is something you don’t want when you’re still introducing characters and the colour of their armour is key to seeing who is doing what and to whom in battle. It’s a shame because at times it can really ooze atmosphere, such as with that splash page above.

Something else this issue has in plentiful supply is action. As soon as Merklynn finishes his prophetic speech the Knights turn on each other, wishing to finish off the battles started inside Iron Mountain. Galadria gets the best line and then some of the characters start hearing a voice inside their head, telling them of incantations to summon the power of their magical staffs. Reading these again brings back memories of learning these off by heart from the toy packaging.

This is where some fundamental changes between the comic’s universe and that of the cartoon become apparent. Here, the staffs just sort of produce the desired effects, like making Lexor invulnerable, Witterquick superhuman fast and Cindarr‘s unleashes a mini-earthquake. But in the cartoon the holographic image on the staff materialised in the real world, for example a cyclone around Witterquick’s body or a giant monster wielding a club for Cindarr. Even the cover of this issue shows Cryotek’s archer, but none of these would appear in the strip. They’re missed and without them it’s not particularly clear what’s happening at times.

“And, like a wild stallion, rearing with savage fury, the mystically powered craft responds.”

Description of the Sky Claw

It also doesn’t help that when some of the characters transform into their magical animal totems these are mistakenly referred to as “magical powers”, when that’s actually what the staffs contain. Instead, the totems are an embodiment of their individual personalities, which they can change into, physically becoming said animal and harnessing its abilities. However, their magical powers are that of speed, strength, healing, decay, knowledge etc. Fans of the cartoon or toys would be able to follow along and it’s clear these are the intended audiences, but it must’ve been very confusing for anyone reading without prior knowledge.

The plot is rather basic this time around. Even though both sides have yet to even experiment with their new powers and totems, Darkstorm insists he and Leoric’s Knights are too evenly matched. How would he know this? Surely they should train with their new magical abilities before coming to that conclusion. He wants an advantage and, annoyed with some of his people complaining about their lack of staffs, he sends stealth master Reekon and the grovelling Mortdredd to find a new weapon to given them that edge.

It all feels rather convulted. Given the cover we know what they’re going to find, but the pacing is all wrong. If this had come later in the run, or even if we’d jumped forward a few months and they were having difficulties managing their powers and wanted something more conventional, it would have made more sense. The saving grace here is the world building in the background. Wanting to rebuild his world no matter the cost to anyone else, Darkstorm’s castle overlooks slums where the poor and hungry struggle to survive, through which Reekon and Mortredd trot along, uncaring of the devastation around them.

They make their way to a contact of Mortdredd’s at Harkon’s Blacksmith Shop. An engineer by trade Harkon found himself without work in the new Age of Magic and retrained as a blacksmith, where he won the contract to repair and replace armour for the Darkling Lords. Underneath tarps scattered about his workspace are high-tech vehicles which are now nothing more than useless relics of the past.

I recognised the one above as soon as its covering was pulled back. It’s the Sky Claw. It was one of the large vehicles from the toy range and one of three that I personally owned. Covered with large holograms and movable levers and wings concealing a variety of awesome weaponry, it was a favourite childhood toy. It’s the whole raison d’être for this story so my excitement levels have been turned up a bit now.

The machine responds to the energy of Reekon’s magical touch, but it’s Mortdredd’s proximity that really brings it to life. While the statement that the symbol from his chest plate transferred to the craft is completely wrong, it’s still a fun way of introducing the craft. I particularly like how magical powers erupt from Mortredd’s chest, while his hand almost disappears into the holographic panel, becoming nearly skeletal-like. Although, why does Harkon say he hasn’t heard the sounds of an engine in years when this follows on directly from the previous origin story?

Able to control it with but a thought, Mortdredd is eager to prove himself to his Lord and Master. Darkstorm wants to wait, plan, gather information before a strike (again, no mention of learning their new skills) and this leads to other Knights calling him a coward. Defending his leader’s honour, Mortdredd attacks the others but find it’s he who ends up pushed out. Seizing the moment, he takes the Sky Claw and launches a devastating attack on Leoric’s castle, hoping to show he’s worthy of his position within the Darkling Lords. None of the vehicle’s magical powers are used though, just the weaponry which is a shame because I was looking forward to seeing those holograms come to life again.

The descriptive panels here are excellent. In fact, throughout the comic they’re a unique mix of science fiction and what feels like medieval storytelling. The latter in particular sets it apart, the comic playing up to this aspect of the characters and setting particularly well, the attention to detail is great.

One of the more interesting magical powers makes an entrance here and that’s Arzon‘s power of knowledge, even though he’s incorrectly drawn as Ectar but we’ll skip that detail for now. He recites his incantation to find out what the Sky Claw is, because there has been no flying vehicle since the Age of Science and it takes them by complete surprise. However, he not only discovers the information he seeks, suddenly everything he’s ever known in his whole life temporarily returns to his mind.

This could’ve set up some brilliant stories for the future. I could see something like that opening up old wounds, thoughts he’s tried to suppress or even things that he doesn’t wish to know. Unfortunately I can’t see this being explored in the short run the comic ultimately had.

On the surface a power like this could seem to give an individual an unfair advantage in any fight, but with everyone having such completely different powers, all with some form of vulnerability built in if not used correctly, could make for some epic battles.

It all comes to a head when Arzon transforms into his eagle form and attacks the cowardly Mortredd from above. From there it all falls apart for the Darkling Lords, who had shown up to finish what the Sky Claw had started. Disobeying orders and nearly killing his leader sees Mortdredd locked up in the dungeon of Darkstorm’s castle at the end of the story, but not before he’s made reference to the Sky Claw feeling alive when it repairs itself during a moment away from the battle. It’s a passing comment for now, but if memory serves me right this could tie in to some revelations yet to come about all of the Visionaries’ magical powers.

The Balance of Power feels very much like an extension of the previous two issues and the cynical might say it’s nothing more than a couple of extended action scenes. There’s little in the way of characterisation but the main point here is to see more of this world and the characters inhabiting it, to see their magical powers and how they could turn the tide of battle. Hence the name of the story.

With Jim having set things up and established the potential for future stories, the authorship is handed over to Gerry for him to develop the comic as its full-time writer. So let’s wait and see what he brings to the table and if all that potential is realised. The next chapter will be reviewed on Wednesday 23rd June. Be here.