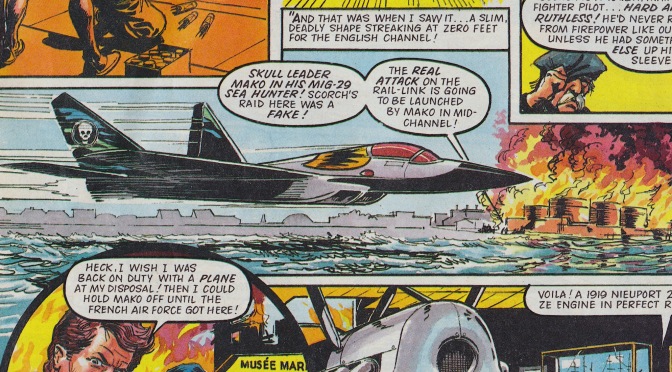 I’ve a distinct memory of reading this issue of Ring Raiders on the school bus and hearing one of the older kids behind us proudly proclaiming, “I’m Joe Thundercloud!” at the top of his voice. Ian Kennedy contributes that sole figure with the free poster taking centre stage. (You’ll see #3’s poster next time.) They were proper gift posters, separate from the comic and I had mine up instantly. My collection of planes was growing, I knew certain large boxes in my parents’ bedroom were bases for Christmas and this was my first reserved issue the comic. These things had me hooked.

Inside things kick off with a new multipart tale written by editor Barrie Tomlinson and drawn by Carlos Pino, Battle Zone ’99. The Skull Squadron pilot causing havoc here is Skull Commander Chiller and with this story he immediately became my favourite baddie. I’m sure I wasn’t alone. What kid wouldn’t love a jet with a sci-fi freeze ray? Chiller would love experimenting with various killing methods involving cold and ice and it would appear he fired up the imagination for the writers too, as he would star in more stories than anyone else.

Launching an attack on a futuristic gravity-powered submarine by freezing it, making it brittle, then destroying it with a well-placed missile, he kills the entire crew. This toy comic wasn’t afraid to show its baddies actually being bad and killing innocents to meet their foul goals. In the year 2057 aboard the Air Carrier Justice the Ring Raiders get a warning that a moment in history is being changed by the Skulls and they set off to rescue the second submarine.

Interestingly, it appears they can’t just set their time travelling planes to appear at any moment they want for fear of altering history further. Instead, once the alert is received via their rings that particular moment in time continues to play out as our heroes scramble. Fans of Doctor Who will know all about how she can’t mess with moments in time once they’re in motion and it’s interesting to see this was also part of the rules here.

In this version of our world there was going to be a Northern European Republic and Scotland was very much a part of it in 1999. The Victor Vector strip later in this issue is set just one year prior and there’s an appearance by the British RAF. So I can only assume Scotland had become independent and joined the European Republic, with England (and maybe the rest of the UK) outside of this union. It feels somewhat prescient, doesn’t it?

“Some people believe that Sea Hunter is capable of operating underwater… and I’m one of them!”

Moving on to the second strip and it’s the phenomenal Trackdown written by Angus Allan and drawn by John Cooper. Professor Deke Martin‘s Doomsday Device is thankfully mobile and the unnamed toy pilot Freddie Riley is taking it and the professor deep into the woods to buy time while his wing, led by Thundercloud, tries to dispatch Havoc Wing. By the end of the story two planes have been destroyed and another original comic character is out to track down the device. It was always a thrill when the comic created these characters for our other toys!

What stands out the most is the amount of ground action that occurs and the level of characterisation being slipped in, in just four pages. The military characters interact realistically, grounding the fantastical set up and giving the aerial action a real feeling of danger. Especially when we’ve seen so many shot down already! We also see Wing Commander Thundercloud break off and order his men to return to base and all we’re told is that his instincts have come into play. So for now his apparent abandonment of Freddie is a mystery. Colour me intrigued by this layered storytelling.

Back then, leader characters in our toy ranges and cartoons were somewhat clichéd, a caricature of what either side stood for. Compare the 80s cartoon Optimus Prime to the nuanced, troubled version from the movies and you’ll see the difference. Ring Raiders is off to a good start in this regard. The complete story here is all about a moment from Ring Commander Victor Vector‘s past and showcases his strategising and leadership qualities in a unique way; he’s on holiday from the British Royal Air Force (in the comic he’s British it would seem) before his Raiders days when Skull Squadron attack the French side of the recently completed Channel Tunnel in the year 1998.

In the real world the tunnel was completed in 1994 so it wasn’t a bad prediction and I remember the regular British tabloid attacks on its construction being headline news around the time of this comic. With no plane at hand Vector befriends a local deckchair salesman who leads him to one. Sort of. I laughed at this I’ll admit, and I mean today as I read this as an adult. The comic wasn’t short of well written humour.

This is great fun and involves Mako‘s Mig-29 ‘Flying Shark’ which (as I touched upon previously) was one of my top toys in the range because of its shark motif and the apparent ‘rumour’ it could be flown underwater. As you can see here it’s no rumour as he begins to drill down to flood the tunnel. Vector also believes it’s true after apparently shooting Mako down with a handheld rocket launcher, however it’s a fact the readers would be in on but the Raiders could never verify.

It’s written by Scott Goodall and expertly drawn by John Gillatt. It has a Flight of the Pheonix feel to it, with added sci-fi elements thrown in, that ghostly underwater sequence, great action, a topical subject for the time and a little bit of comic relief. I also love the ending when we find out the entire flying aircraft carrier makes a trip far into the future just to drop Vector off for his hols! It’s a shame we don’t get the chance for more development for him (or indeed, more development for them all) due to the short lifespan of the comic and the ensemble nature of the cast, but I have enjoyed this softening of his character.

Obviously there’s still no content for the letters page because of deadlines in getting this issue to print, so instead stars of two of the issue’s strips introduce one page apiece outlining the history of both sides in the conflict and requesting input from readers in all its various forms for editor Barrie and editorial assistant Terry Magee to sort through.

It appears the Ring Raiders were plucked right out of raging battles (which fits in perfectly with ‘Cub’ Jones’ affection for the bomber crews in the next story) and there’s a little hint for readers of some of the additional abilities of their rings, something toy collectors were already aware of but it’s nice to see a certain one mentioned given how this issue ends. The little throwaway line of how Skull Squadron recruits had been “twisted by war’s cruelties” hints at possible future character plots too.

Cub is back in the war he was plucked from in Bomber Blues which makes a surprise return as an ongoing story after last issue’s apparent one-off. Following what was now clearly a prelude, Skull Leader Hubbub‘s Rebel Wing return to take their revenge on the crew who rescued Hero Wing, unaware they were grounded after their fantastical tales to their superiors. Nor is he aware they’re also in possession of a signal ring to summon Cub and his team.

I’m so happy to see this story continue. The premise is just too good to leave at one issue. Writer James Nicholas‘ fondness for the subject matter and Don Wazejewski‘s art style are just perfect and there’s a true vintage war comic vibe going on here, even with the mixture of aircraft and electronic weaponry.

In the toy packs there could be a mix of prop planes and jets and I often thought how on earth did they fly in formation together? Well they don’t, instead each is used for a particular purpose. For example the prop craft often being brought in for low-flying raids on slow moving targets or navigating close over difficult terrain. This is what happens when someone who knows their stuff writes for us. I mean, just look at this glorious action panel!

The comic certainly wasn’t shy in destroying the planes we were playing with as kids either. Throughout this issue about half a dozen altogether are outright destroyed, giving an air of jeopardy to the stories. Instead of vast battles where no one actually gets shot down or injured as we’d have seen in our cartoons, here anything seemed to go!

Before the final strip we’ve an advert for the toys and a pin-up of Vector. The advert is very basic and appears to have been put together by the comic itself rather than Matchbox, but they’d get more creative in future issues, even incorporating new artwork by Sandy James. Speaking of Sandy that’s his work on the pin-up before the full-colour second chapter of his story, Freedom Fight.

As part two commences the fort’s soldiers are frozen in fear at the futuristic aircraft but the rebels, though just as confused, see their chance and charge the fort. What’s compelling here is finding out another rule to the overall story, and that’s how the Ring Raiders must never fire upon or harm anyone caught up in Skull Squadron’s plots, even if those people are firing upon our heroes.

This leaves Commander Kirkov in a predicament. How can he push back the rebels without opening fire on them? He can’t take sides, he’s just trying to preserve history as it was originally written. Writer Tom Tully uses the unique features of the plane mentioned on the toy packet to great affect here and has Kirkov blast the ground with his laser cannon, setting it on fire and stopping the advance. It reminds me of some classic set pieces from Airwolf, which is perfectly fine by me! Sandy’s bold colouring is spot on here.

Once again the comic ends on a riveting few pages, finishing with a cliffhanger of Kirkov’s ‘Comet’ F-4 Phantom on fire and plummeting towards the very fort he’s trying to save. The final caption simply reads, ‘In A Fortnight’s Time: Flying on ring-power!’ Look back at that letters page preview and you should know why I was so excited to get my hands on the next issue back in October 1989. In fact, I can’t wait for it now!

I think I can say with confidence Ring Raiders had a very firm foundation to its universe, characters and stories at this very early stage. Building on the basics from the premiere issue Barrie and his team were wasting no time in exploring different characters, scenarios and the various kinds of aerial action they could depict. It honestly feels like its writers and artists were having a whale of a time with the subject matter. I know I am.