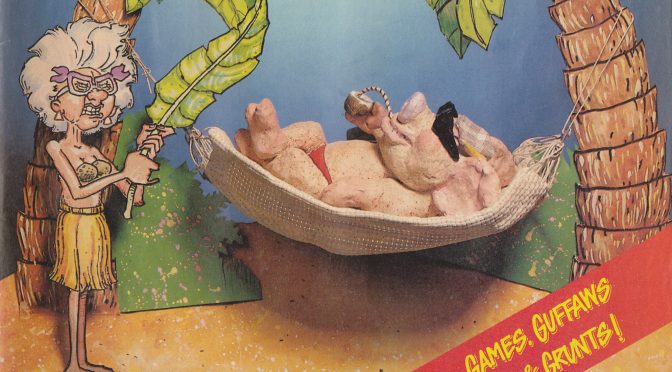 While OiNK‘s creators Tony Husband, Patrick Gallagher and Mark Rodgers assembled an insanely great mixture of various art styles from the best cartoonists and illustrators around, many would agree Ian Jackson‘s work is considered the seminal OiNK look. His main strips were Uncle Pigg, Mary Lighthouse and The Sekret Diary ov Hadrian Vile and his covers always elicited an excited reaction when I picked up the latest issue.

As well as his jagged, animated and highly original drawings he was also the person behind the covers which featured actual model work. Who can ever forget the famous OiNK Book 1988‘s pig face (and tail) and the first Holiday Special of plasticine and cardboard, which you should be able to see at the top of this post.

To mark OiNK’s 35th anniversary, John Freeman has written a fascinating post all about Ian for his Down the Tubes website. When I was writing the previous version of the blog Ian was one contributor to the comic who remained an enigma, so I’m very happy to see this could be rectified this time around, starting with John’s research.

Above, you can see Ian with his brother, John Jackson a family law barrister in Leeds, who shared on Twitter this photo and a recent piece by Ian of the Sandsend valley where his shop, Wild Hart resides. It’s a gorgeous illustration and it reminded me of a certain other map of Ian’s I remember enjoying somewhat.

John’s post goes into more depth on Ian’s catalogue of work, such as his work for Punch magazine, which fellow OiNK cartoonist Jeremy Banx also contributed to. I wasn’t aware of a children’s cartoon co-created by Ian called Minuscule Milton, the art style of which is clearly recognisable and it’s a lovely looking thing indeed.

Created for CBBC and broadcast between 1997 and 1999 it tells the tale of a very, very tiny little boy who lives in a clock on a mantlepiece, with only his canine friend aware of his existence.

John has plenty of information on Ian’s further work in illustration, model building, cartoons and more on the Down the Tubes post. For any fans of OiNK it’s an essential read and you can even watch an episode of Milton’s show while you’re there.

On sale right now from #MarvelUK... 32 years ago. Did you collect any of these #comics? Do you remember any of these issues?
The mammoth Next Time promo from the previous issue (swipe to see it all), I can’t wait for issue 11 this Monday! Full review in just two days 😃🏍🐽
32 years ago (wow!) I was sat on the floor of my local newsagent’s with several copies of the same comic all around me, trying to decide which one I wanted. Why? Find out in the review of issue one of #RingRaiders. Based on the #Matchbox toys, it’s a very favourite comic from childhood which, to be honest, is still a favourite today. It’s that good.
(I do think this and last issue’s covers should’ve been swapped over, both would’ve been perfect for their respective stories.)