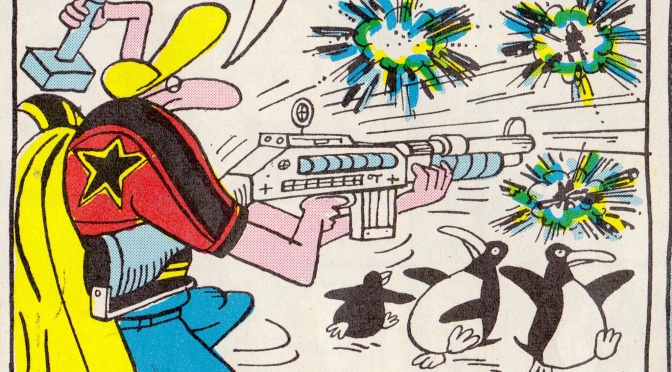 This issue of OiNK sits on my shelves as a loose collection of pages, although you wouldn’t know it until you picked it up. But if you’re not careful all its pages would flap out and become strewn all over the floor. Why have I taken one of my precious comics apart like this? There’s a very good reason and we’ll get to that later in the review, but for now you’ll just have to trust me when I say I had no choice. Hopefully that’s got you suitably intrigued to stick around for the remainder of this post all about the Star-Spangled USA Issue, as if you couldn’t tell from that logo.

Andy Roper’s cover art makes just as big an impression, his King Pong strip the star of the inner pages. The recreation of the famous New York finale makes the perfect cover and the strip itself is written by Mark Rodgers. Rather than ape (sorry) a human character by putting a pig snout on them, Mark has taken another animal and pig-ified them, creating the “giant ape-like pig”, which is a bit of a stretch. But ridiculous scenarios are par for the course with OiNK, and the more ludicrous the better so we’re off to a swinging (sorry again) start.

Cutting the plot of the epic film down to a couple of pages we do without the love story so instead when King Pong’s smell gets too much for the city his captor turns into that favourite villain of OiNK’s, a butcher. Taking him captive in return it’s up the Empire State Building we go and just when you think it can’t get any more silly the sad ending is swapped out for a really, really stupid heroic getaway. Wrap it all up in one of the comic’s trademark pun-riddled morals and it’s another classic.

The amount of tiny details Andy squeezes in over the two pages is fantastic, with plenty to keep the eyes occupied and the reader chortling along. From one iconic American character to another, new OiNK writer Vaughan Brunt makes his debut with The American Super-Hero, drawn by Mike Green. I remember telling my friends in school about this one. I took every chance I could to highlight OiNK’s jokes, especially when it was a parodying something they enjoyed. I was always trying to make pig pals out of them.

Vaughan would contribute to 17 issues of OiNK altogether before moving on. While he was solely a write (a very funny writer) away from the sty he’s a very accomplished artist. While he doesn’t have his own online presence, a fan site for classic television series The Prisoner includes an art gallery of his paintings of Portmeirion, Wales where the show was set. You can check out his work here. Remembering those gorgeous painted OiNK spoofs (such as Watery Down and Simon Thorp’s movie posters) it’s such a shame Vaughan didn’t draw for the comic in his gorgeous painted style.

Hadrian Vile’s strip returns to its diary format with some big news for him and his family. Writer Mark Rodgers and artist Ian Jackson’s creation is about to have a baby sibling. As I’ve pointed out before Hadrian’s age increased in OiNK’s birthday issue and now we’d see his mum’s pregnancy for a number of months in real time, from the moment Hadrian notices her belly and her rather strange appetite (to say the least). What we have here is a typically funny Hadrian strip with a surprisingly sweet ending.

Hadrian would continue to make his mark on his mum’s pregnancy and in the end we’d see the big day arrive in a family-orientated issue of the comic with a special three-page strip. That’ll be in the latter part of this year. I do remember the strip didn’t go down the well-trodden route of the rebellious boy not having any interest with a cutesy baby in his life or disliking  his younger sibling. Instead, Hadrian was instantly besotted and took them under his wing as his potential protégé! The regular strip was already a favourite, but with its real-time aspects it became an even more unique and original OiNK highlight.

OiNK had an eclectic style, drawing in established artists from the world of children’s comics, adult newspapers and magazines, as well as a range of younger contributors whose career was only beginning. While other comics may given the established cartoonists the larger pieces of work and the newcomers the smaller strips, in OiNK they were all treated as equals. For example, alongside those new to the world of kids’ comics were the likes of Mike Higgs, this issue contributing a simple half-page strip about the Statue of Liberty taking a hygiene break.

A couple of highlights from Steve Gibson’s contributions are next. At this point in the run Steve’s style was being used mainly to illustrate quizzes and fact sheet pages, such as the Coast-to-Coast Quiz where we see his version of Snatcher Sam aka Marc Riley, and then Hogathan King brings us Entertainments USA and a recently released cinema flop was squarely in Steve’s sights.

The next highlight was an easy choice to include. Jeremy Banx’s Mr Big Nose has done many things, such as playing Rambo in Little Bo Beep, having Christmas dinner with a turkey and hoovering with a dolphin (named Keith), but here in just half a page he succinctly sums up the US of A like no one else could. A publication like Private Eye could run this strip today and it’d be met with just as many laughs.

If any part of this issue could summarise the attitude OiNK had towards America it was that.

So why is my copy of #31 of my favourite comic of all time falling apart at the seams? Because it doesn’t have its staples anymore but it’s not my fault they had to be removed. In the centre of this issue is a superb J.T. Dogg Street-Hogs poster showing Dirty Harry trailing Hoggy Bare reluctantly into action. But this is only one half of a double-sized gift from our ever-so-generous Uncle Pigg.

The top half featuring Emma Pig and Hi-Fat can be found on the inside front and back covers, so to put the whole thing together kids were instructed to carefully undo the staples (don’t just pull!) and remove the middle poster, then pull the staples out from the rest of the comic, put the cover pages to the side and then somehow push the staples back in through the remaining pages. Unless you have one of those really long office staplers this is impossible, it certainly was for me at this ripe old age never mind back then (I never put it apart as a child).

But in order to show you this as intended I couldn’t just hold up the middle of the comic and try to get a photo of the inside covers, so just for you lot my copy shall forever fall apart. See what I do for this site? Anyway, it really is a thing of beauty, just like all J.T. Dogg art really. I also love the names of the bikes which I don’t think have been mentioned before; the Hogley-Davison Porkchopper 222, the Yakawaki Trikey-Wikey 5000 and my personal favourite the Sinclaire C500 Electrodustbin, a little dig at the Sinclair C5 personal electric cycle from the 80s.

The ‘Hogs would be back in the next issue with the start of their brand new adventure, The Day of the Triffics which was first name checked way back in #11! This, along with the back page of #27 acted as a way of hyping up the readership for their long-awaited return, although it was kind of lost on me because I hadn’t read their earlier strip, what with my first issue being #14. The artwork looked wonderful though and very funny, but nothing could prepare me for how much I’d fall in love with the characters just two weeks after these posters.

This issue has a “fantastic” back page too. When you turn to it initially you might think there’s been a printing error because it’s upside down but in reality it’s just another clever gag on the part of Chris Sievey aka Frank Sidebottom. Frank’s showbiz career and (probably more importantly) lifestyle was his main running gag, with strips featuring him mingling with celebrities who in reality were cut-out photos glued to the page. Flip over this issue of OiNK however and you’ll see he’s taken it to the next level as a cover star of Time magazine.

Having this printed upside down means the comic opens on the correct side of this faux cover, which in itself is a little bit of genius. As ever, his attempts to convince us of his worldwide fame are hilariously portrayed. For example, one very quick glance at the background of the supposed Yellowstone National Park photograph will give the game away. Chris’ creations, showing his character’s poor attempts at creating a fictional reality around his ego, were always a highlight and actually, as fun as the strips were, I think I preferred it when he did stuff like this.

I’ve (carefully) flipped the comic over again and placed it back on to the shelf as we’ve come to the end of yet another review. The next issue of OiNK is themed around sport which is not my favourite topic (Olympics aside) so it’ll be interesting to see how it tickles my funny bone. Remember, just the day before this review was published there was an in-depth look at Crash magazine #42 which featured an interview with OiNK’s three human editors and a lot more besides. The special free issue of OiNK given away with that magazine will also have its own review, which you’ll be able to read from Saturday 2nd July 2020. Then #32 of the regular comic will be here from Monday 11th July. Phew! See you soon I hope.

32 years ago today in #MarvelUK’s #Transformers Robin Smith returned to cover duties which is always a great start. Inside, the Matrix Quest continues with Backstreet having a time of it in an armchair which must have a detachable back. If you know the shape of Backstreet you’ll know what I mean! 🤣 The scene is part of a larger story and makes sense, I promise! Most excitedly one of my childhood toys features, getting tortured by new Decepticon leader Thunderwing (who isn’t as camp as portrayed here lol). Poor Hosehead!
Back in 1991 this week saw the release of the sixth edition of #HavocComic, #MarvelUK's fantastic anthology weekly, now with an original Liam Sharp cover! ❤️ #Deathlok's strip is like a super violent Knight Rider and I'm here for it!
Really looking forward to the next #HavocComic tomorrow! 🤖🚀💪💀🔥👻🏍🐽
A little thank you from me to you, because this brill bit of news is thanks to you all. Blog post about this now up, link in my bio (OiNK.blog) 🐽❤️🐽