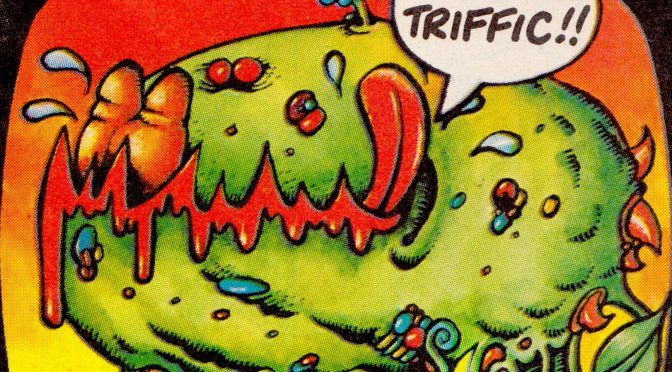 With this page young eyes across the UK were exposed to the insanely talented Malcolm Douglas for the first time. To anyone unfamiliar with the name you may remember him as ‘J.T. Dogg’, the genius illustrator behind Street-Hogs, Ham Dare: Pig of the Future and the OiNK Superstar Posters.

Pig pals will have fond memories of his big, bold and gorgeously colourful double-page spreads leaping out at them every fortnight. Within the pages of those early issues Dogg’s work included the original 11-part Street-Hogs story, written by Mark Rodgers, as well as a series of suitably piggy spoof Superstar Posters such as The P-Team, Hambo, Peter Swillton and the ilk. His work was undoubtably displayed on many a bedroom wall across the UK.

Malcolm originally became an illustrator when he volunteered to draw for a newspaper run by the Sheffield University student union. Discovering he could be paid for his work he developed his style and was published in a wide variety of comics, which after OiNK included Brain Damage and Zit, two titles heavily influenced by the one he’d been such a huge part of.

He also regularly contributed Fred the Red for Manchester United’s match programmes, but his best known work remains all of those beautiful pages found inside OiNK.

When I started collecting OiNK with #14 the ‘Next Issue’ section had a small monochrome drawing of a character called Ham Dare: Pig of the Future, a new multi-part story written by Lew Stringer and brought to life by Malcolm. Knowing of Dan Dare from friends’ comics I was looking forward to seeing a joke version of the character. It would be my first encounter with Malcom’s work. I knew it was going to be funny, I didn’t expect it to be so lush!

Malcolm didn’t receive any professional art training and his skills weren’t limited to drawing either. He was a musical performer and played the mandolin and fiddle among other instruments, playing with various bands he was a regular face around the Sheffield music scene. His knowledge of folk music was encyclopaedic and he contributed to two books about the subject, with a third being revised before his death.

Malcolm sadly died of cancer on 22nd March 2009 and it is on this date that we remember his stunning OiNK work.

During the two-and-a-half-year run of the comic J.T. Dogg brought us three lengthy Street-Hogs strips, a Ham Dare serial, plus more from the Pig of the Future in both OiNK Books and a Holiday Special after the comic was cancelled, and of course let’s not forget those six magnificent Superstar Posters. He even drew Harry the Head in one issue.

Just imagine if all of his work was collected together in one lovely book! I wonder if Rebellion are imagining it too?

OiNK came to its conclusion in October 1988 and while the second annual was already on sale most of us wouldn’t receive it until Christmas, a couple of months after we’d said goodbye to our favourite comic pals. J.T. Dogg returned with this glorious cover to the 1989 Book, a fitting end to the run and a fitting tribute to a man whose talents were second-to-none.