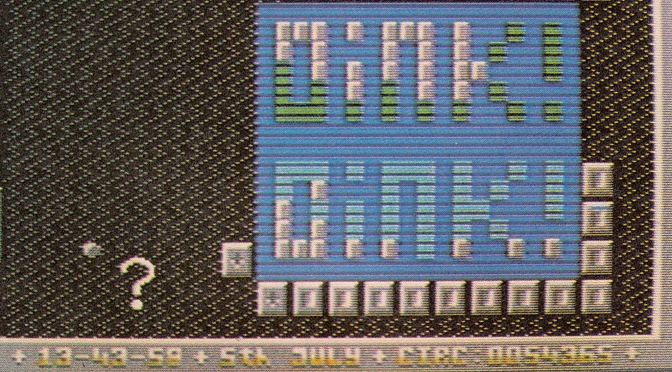 Recently on the blog we’ve seen the preview of the OiNK computer game in Zzap!64 #26, then the special feature in Crash magazine #42 and its free OiNK comic. There’s also been a look at the Retro Gamer article which contained an interview with the programmer of the game. It was an exciting time for pig pals who owned one of the 8-bit computers back in 1987, that’s for sure. But what of the finished article? Was the game worth the hype?

Zzap!64 #28, on sale this day 35 years ago, contained the answer. Just a quick note about this issue first of all and a brilliant little detail on the cover. Staff writer Julian Rignall recently shared on Twitter that a previous competition winner’s prize was to appear on a cover of the magazine, immortalised by artist Oliver Frey. That’s reader Karen Wild just in front of the “4” in the logo! Another detail is the mention of Bond movie The Living Daylights further down the page, although inside it’s an exact article already published in Crash last month. Rather cheeky of the publisher Newsfield!

“This is another poor licensing effort, however when viewed in its own right, OiNK has a lot to boast about.”

Anyway, moving on and the OiNK review itself takes up just over a full page and in keeping with their normal format there’s a descriptive guide to the game breaking down the individual elements, with the opinions of whether those elements were any good or not kept separate, divided up between the three members of the team that played it. There’s also one screenshot of each of the mini-games (but unfortunately none of the Uncle Pigg screens) and a summary box which breaks everything down into individual percentages.

The review does a good job of explaining each of the mini-games and as you can see they really don’t have anything to do with the comic at all, save for maybe Rubbish Man’s sprite. I can’t help question why the Pete’s Pimple game didn’t have a pimple-coloured ball and why was it battling against aliens? Why not pimple cream or bullies like in the accompanying strip in the free comic? Why does Rubbish Man fire lasers and not cold custard or rotten mash potato? Why in later levels is he being attacked by rubbish? The Tom Thug game makes no sense whatsoever! Two of the reviewers at least share these thoughts, but as a game in its own right their opinion is somewhat more positive. Here’s the review.

Identified by initials on their illustrations, reviewers Ciarán Brennan and Steve Jarratt (who would go on to launch rival mag Commodore Format, which was my C64 read at the time and which you’ll see some OiNK content from later in the year) both reported that the game plays very well and is excellent value for money for the price. It’s just not really an OiNK game. I think it’s clear third reviewer Paul Sumner hadn’t read OiNK though, and is coming from the perspective of a general game about creating a magazine or comic.

Although an attempt is made to include some of its humour in the panels of the electronic comic the player completes by playing the games, it’s clear from the comments here that hasn’t really worked. The initial idea was to include panels from the actual comic and some were written by OiNK’s three editors Tony Husband, Mark Rodgers and to a lesser extent Patrick Gallagher. However, these were cut back to text only and then trimmed down even further by programmer Jon Wells so the jokes were somewhat lost in translation.

For me, the big takeaway here is that the game’s bad reputation isn’t justified. Among pig pal circles it’s usually ridiculed as being an appalling game, unplayable and basically a complete disaster. Yes, for pig pals it was a disappointment; we could’ve had a barmy platform game, taking control of various characters each with a unique ability linked to the comic as they ran around OiNKtown fighting off Mary Lighthouse and her protesters on our way to the newsagent, just off the top of my head. Instead, as confirmed in the interview in Retro Gamer, the programmer wanted to make specific mini-games and saw this as an opportunity to do so, rather than developing a game from the licence. Unfortunately, with only a handful of exceptions, this was par for the course with licences back then.

But the game itself, taken on its own merits, is very good. Check out another set of review scores, this time from C&VG (Computer & Video Games) magazine and printed in OiNK #34.

I completely concur with the reviews here. I played it a couple of decades after its release (I didn’t have my own Commodore 64 until Christmas 1991) when I began collecting the C64 as a retro system around 2010. I found the game on an old Commodore Format covertape. It was great to see the OiNK logo and Uncle Pigg digitised on the screen when it loaded. Yes, I had that initial disappointment as someone looking for an actual OiNK game, but when I got into it I had so much fun. It was very addictive, each mini-game was very playable and Rubbish Man’s in particular had that just-one-more-go appeal.

It may not be an actual OiNK game per se, but that’s the only reason I played it in the first place and I discovered a wee gem.

I never finished it to see if there was a proper ending involving the characters (I doubt it) but I’d definitely like to set the record straight. It was a brilliant little game. Unfortunately OiNK fans didn’t buy it because of its lack of OiNK content, and those who didn’t read OiNK didn’t buy it for obvious reasons. But if you have a C64 (or a ZX Spectrum or Amstrad CPC) and enjoy a spot of retro gaming, you could do a lot worse than tracking down this oddity of OiNK merchandise, it’s quite common to see it for a few quid on eBay. Trust me, you won’t regret it.

35 years ago today Jimmy ‘The Cleaver’ Smith made quite the entrance as he finally met up with Heironymous Van Hellsong in @banxcartoons’ brilliant mini-series in the latest issue of #OiNKcomic Weekly. @davyfrancis6’s Greedy Gorb was the cover star and inside contributed the biggest laugh of the whole issue! There’s also a cheeky dig at WHSmith in a brilliant strip by Mark Rodgers & Wilkie in return for them placing OiNK on the top shelves 😂
32 years ago today #TransformersUK welcomed Andrew Wildman back to cover duties and, combined with Robin Bouttell’s colours it’s a glorious piece that refers to a wonderful spread inside, but first up the editorial page (which has not been my friend recently) makes plenty of promises about future issues, not all of which would be kept. But yes, that spread in the new strip (also by Andrew) which brings together two different versions of #Unicron & #Galvatron (neither from the movie) is brilliant isn’t it?
This is what happens inside your body when you swallow an oyster. I believe this to be true. Internal organs agree, it’s just not right lol! See what happens to Burp the Smelly Alien from Outer Space when his body rebels against his taste of seafood in the latest #OiNKcomic #comicreview on the #blog now, link in my bio (OiNK.blog). 🦪👽🐽
35 years ago this weekend none other than Charlie Brooker wrote this edition of @lew.stringer’s Pete and his Pimple for #OiNKcomic starring “a bad caricature of Bob Holness” (according to Lew 😂). The little signs being held up by an anonymous are what get me! 🤪