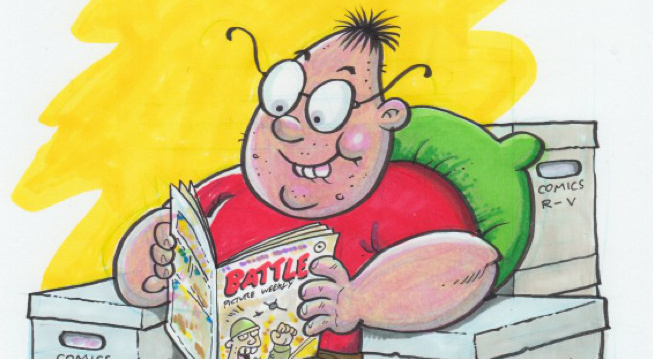 If you’re not already following Lew Stringer‘s blog then let this be your official instruction to do so. Not only will you be kept up to date on the latest comics work of Lew’s seeing publication in titles such as Doctor Who Magazine, Beano, The Dandy Annuals and Rebellion‘s Cor!! Buster Specials, followers also get a look into his extensive back catalogue, glimpses into how some fondly remembered creations came to be and, in the case of OiNK and Buster character Specky Hector, a look at what some characters are up to these days.

Specky first appeared in #20 of OiNK and popped up again in #25 and then in the comic it merged into after its run came to an end. Well, fast forward a couple of decades to the present day and Lew has shown us how Specky is doing. I’m very happy to see he hasn’t changed one bit.

Drawn as an A4 piece to help raise money for the War Child charity via an auction run by Enniskillen Comic Fest organiser Paul Trimble, it shows everyone’s favourite comics collector is still very happily collecting comics. In the end this one drawing raised £105 for the charity which is great news too.

Fans of the Hector’s may like to know he also made an appearance in 2020’s new Battle (of Britain) Special where Lew brought back one of his classic strips in a new colourised form. The special is still available on the 2000AD online shop at the time of writing.

Thanks to Lew for his kind permission to share this image here on the OiNK Blog.