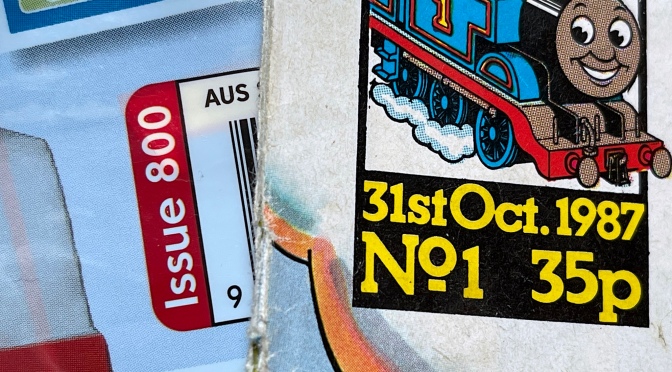 Back in 1987 I was nine-years-old and already a bit above the target audience for Thomas the Tank Engine & Friends, but growing up in a town with actual steam trains (the headquarters of the Railway Preservation Society of Ireland were around the corner from my house) a lot of the kids in my town loved the original Railway Series books by the Rev. W. Awdry and the subsequent TV series with those stunning model layouts. In October ’87 I found myself in the newsagent to pick up the latest issue of OiNK, the only comic I was collecting at the time and I spotted “A brand new comic” on the shelves.

This was my first ever Marvel comic, believe it or not. I even got my drawing printed in a Christmas issue!

I collected it for about two years before finally moving on but over the years I’ve seen younger family members and friends’ kids become fans just as I had been. Working in newsagents over the years I was aware the comic was still ongoing, surprisingly keeping the original numbering even though it had gone through a couple of different publishers. Then a few months ago while browsing the children’s comics for a friend’s wee boy I discovered Thomas & Friends (as it’s now called) was at #797!

So fast forward to the present and I’ve bought #800 for him and thought I’d open it up to see what’s inside and compare it to the original. But first let’s just dwell on that issue number for a second. The 800th issue! This makes it the longest-running UK licenced comic ever. It’s an amazing achievement and I doubt it’s going to come to an end any time soon, the TV series is as popular as ever.

Now, when I mention modern children’s comics there’ll inevitably be a chorus of middle-aged men complaining that they’re “nothing more than flimsy leaflets” with “cheap tacky toys” in plastic bags “pushing the price up”. Well let’s just put this to rest once and for all, shall we? While the comic magazine itself doesn’t mention it’s celebrating the milestone it’s still packaged as a ‘Special Edition’ and contains a die-cast metal Track Master Thomas which on its own sells for £4.99 in the shops. Not a bad start!

For just £1 more than the cost of the toy, for £5.99 (usually the magazine costs £4.99) you also get a 36-page issue printed on really great quality matt paper with a gloss cover and it’s chock full of content for younger fans. There’s also a second, plastic toy set produced specifically for it, a large double-sided wall chart, a poster and loads of stickers which are used throughout the pages as you’ll see below. I’d say that’s a bargain.

So how does it compare to the original comic I bought for 35p back in 1987? I’m not mentioning the cover price for comparison reasons, it was 34 years ago, of course it’s going to be a lot more expensive, just as 35p was a lot more expensive than comics from 34 years before that. But I thought it’d be interesting to see how things have evolved after 800 issues, so below are some of the interiors of the first and latest issues and as you’ll see, it’s very much the same beast at its heart.

The main element of the original comic were the picture panel stories, which for the first year were adaptations of the TV stories (which in turn were adaptations from the books) then after that were all original, written specifically for the comic, some being adapted back on to the TV. There was also a short prose story every fortnight which readers were encouraged to “read aloud”.

These formats remain although with so many years of the show to pull from now they all seem to be adaptations and they use stills from the current CGI series rather than original illustrations. What’s neat is how those stickers I mentioned are used throughout the issue to fill the gaps in stories, features, puzzles and more. For the young readers it’s like a really fun old-school Panini sticker album on top of everything else is contains!

Obviously back when I was nine my attention span didn’t last long enough for me to finish colouring this image of Thomas and it’s remained as such all this time. The activity can be found a few times in the current publication, on two dedicated pages and even the editorial credits page.

As a nine-year-old I was already too old for the comic if I’m completely honest, evidenced by the ABC collection and some very simplistic puzzles such as Henry the Green Engine highlighting other green things the younger readers were meant to identify. I just ignored these and kept to the stories, editorials and letters page, as well as the middle-page spread below. But for the target audience they brought a level of interactivity to the comic and this is something the modern version continues.

The middle pages of my #1 are missing so this is from the only other issue I kept (#31) which was the second Christmas issue and the one I got my drawing published in. The middle pages had very simplistic questions about what could be seen in the picture but the reason it’s missing from my first issue is because they could be cut out and put on the wall, issue after issue creating one long drawing around the Island of Sodor, wrapping its way around our bedrooms. There are plenty of such pages in the new one.

There may not be murals but there are plenty of gorgeous CGI shots from the show used for spot-the-difference pages, mazes, pin-ups, puzzles and so much more. Even the competition in #800 reminded me of the one we got in #1. Thomas & Friends may look very different from the Marvel comic on first glance but take a closer look and it’s a very natural progression. In fact, I’d go so far as to say I’m surprised just how much it’s kept to the original ideas.

But I am clearly not the target audience so the final word has to go to the little person I bought it for, my friend’s baby boy, Ollie. As you can see, he’s clearly very happy with the gifts that came with it. In fact, three months before his third birthday he saw them and came out with, “Thomas the train”, which he’s never said before! A very cute moment I have to say.

His mum Vicki had a look through the comic itself, at the wall chart and stickers and the contents as a whole and remarked at how much was in it. Not expecting it to be much more than an excuse to package the toys in with something, she was pleasantly surprised at the value.

So there you go, if you have a young child in your life who watches Thomas & Friends on TV this is a top comic magazine for them. Usually £4.99 every four weeks, #800 is £5.99 but then again you are getting a toy which is normally a fiver on its own (and by the looks of it #801 has one too). It’s available online but everywhere I looked was charging around £10.00 for it because of bulky postage, but you’ll find it in most newsagents and supermarkets easily enough.

Next year is the 35th anniversary of the comic so I might do an in-depth retrospective then like I did with The Real Ghostbusters. But to finish with for now, here’s a look at the original audience and the current one.

Surely THIS was the #comics #crossover we all REALLY wanted!! Check out the full strip, some insight from cartoonist @lew.stringer and other highlights in the latest #OiNKcomic #comicreview on the blog, link in my bio (OiNK.blog) 🐽
32 years ago today in #MarvelUK’s #Transformers letter answerer Dreadwind was getting a bit fed up of repetitive questions and, in typical Marvel UK fashion, was rather blunt with the young readers! Whether it made a difference we’ll have to wait and see. In the Matrix Quest, after an excellent pastiche of The Maltese Falcon we’ve moved on to old fashioned westerns, but not before #OptimusPrime takes a trippy trip into the mythical side of the Matrix’s power, a thread that would continue through to the modern movies.
The atmosphere comes thick and fast, the action is brutal and the ending actually quite funny! The final chapter of Ricardo Delgado’s in-cred-ible Age of Reptiles from the latest issue of the UK’s #JurassicPark comic from 1994. You can read more about this phenomenal strip in the issue’s #comicreview, up on the blog (link in my bio - OiNK.blog) 🦕🦖🎡🎟🐽
On this day 31 years ago the 7th edition of #MarvelUK's #HavocComic set newsagent shelves alight with a gorgeous #RoboCop cover and extra space given to #AlexMurphy and some of the other strips inside due to Conan's one-week absence. #Deathlok, RoboCop and #GhostRider make up for it though!